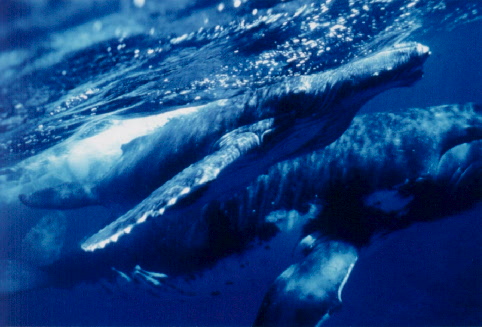 What is the biggest animal on Earth? Hint: It’s not an animal that lives on land. It’s the blue whale. Blue whales can grow to be 80 feet (24 meters) long and weigh 150 metric tons. The heart of a blue whale is as large as a small car!

WHALES ARE NOT FISH

The body of a blue whale looks a lot like the body of a fish. All whales look like fish, but whales are not fish. Whales are mammals that live in water.

There are many differences between fish and whales. Whales are much bigger than fish. Fish stay underwater all the time and breathe through gills that take oxygen out of water. Whales breathe through lungs just as you do, so they must come up for air. Fish are cold-blooded, which means their body is the same temperature as the water around them. Whales are warm-blooded (like humans), and so their bodies always stay warm. Fish lay eggs. Whales, like almost all mammals, give birth to live young and feed their babies on mother’s milk. 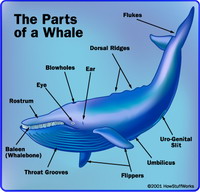 Some large sharks, such as the great white, can eat whales. But people are the main whale hunters. People began to hunt large numbers of whales in the 1700s. They hunted the sperm whale for a waxy liquid used to make candles and for whale oil to burn in lamps. People hunted baleen whales for whalebone to make combs and other products.

People no longer hunt whales for lamp oil or whalebone. However, they still hunt whales for oils and other materials used to make soap and cosmetics. Many whales, including right, bowhead, gray, and blue whales, have become endangered. Some countries in the mid-1900s decided to limit or forbid whale hunting. A few nations kept on hunting whales. Conservation groups now ask that all whale hunting be stopped. They fear that some kinds of whales could disappear forever.