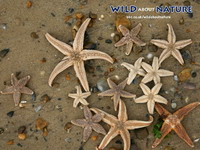 Try to picture an animal that is almost all mouth and arms. Its arms are covered with feet, and it has no brain. This strange and wonderful sea animal is called a starfish. Another name for starfish is sea star.

The arms of a starfish give it the shape of a star. Starfish get their name from this shape. Most starfish have five arms and look like the five-pointed stars on the American flag. Other starfish have six, seven, or more arms. Some only have four arms. There are about 1,500 different kinds of starfish.

DO STARFISH WALK ON THEIR ARMS?

A starfish uses the feet on its arms to move around. These special feet are called tube feet because they are like hollow tubes.

All the hollow tubes in a starfish fill up with water. The water-filled tubes make the starfish rigid enough to walk. Starfish have no bones.

The starfish pushes water out of its tube feet to send its arms forward. It uses the suction cups on its feet to attach to a surface. Then, the starfish uses muscles at the base of the tube feet to pull itself forward. The starfish moves along by doing this over and over again.

If the arm of a starfish breaks off, the starfish can grow a new one. The broken-off arm can even grow into a new starfish.

CAN STARFISH THINK WITHOUT A BRAIN?

Starfish do not think the way that you think. Starfish just sense things. Although starfish do not have a brain, they have nerves in their arms. The nerves let them touch, smell, and taste things. Starfish also can tell light and dark with a spot on the tips of their arms.

WHAT DO STARFISH EAT?

Starfish eat other animals that live in the sea. They like animals with shells, such as clams and oysters.

Starfish have a really weird way of eating. The mouth of a starfish is in the center of its body. It does not have teeth. The mouth connects right to a stomach that is like a bag. When it is time for dinner, the starfish uses its arms and tube feet to pry open the shell of a clam, mussel, or oyster. Then it turns its stomach inside out and pushes its stomach inside the shell. The stomach wraps around the soft body of the prey. It digests the animal outside the body of the starfish. Yum!