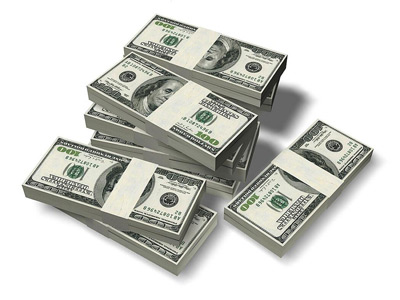 An important step to improving your vocabulary is to not only learn the appropriate terms, but to learn the words that commonly go together with those terms. These word combinations are often, adjective + noun, verb + noun, and noun + verb pairs. Each of these collocation sheets provide collocations for commonly used words arranged into categories. Each collocation is illustrated with an example sentence.

He thinks working in marketing is easy money. I think he'll find it's quite a different story.

If you complete the project before next Tuesday, there'll be some bonus money.

The best way to feel good about any purchase is if it's been made with hard-earned money.

It's not right to waste taxpayers' money on projects that benefit those who are already wealthy.

Would you like a little extra pocket money this weekend?

Could you lend me some lunch money today?

They won a lot of grant money for their research into DNA.

I don't want your dirty money!

That gang is demanding protection money from every store on the street. It's scandalous!

We plan to move to Hawaii with our retirement money.

The police discovered more than $2 million in fake money.

The following list includes verbs that are commonly followed by the noun 'money' or an amount of a particular type of money or currency. Verbs that are similar in meaning are grouped together. Each verb or verb group has an example sentence to illustrate usage.

The government printed a lot of money in 2001.

Let's count your money and see if you have enough to buy that.

The company brought in more than $4 million.

Could I borrow some money for this weekend?

I'll lend you some money until next month.

bank, deposit, pay in, pay into the bank, put in the bank

I deposited a large amount of money last Friday.

draw out, get out, take out, withdraw

pay out, shell out, spend

They paid out more than $300 dollars for that lamp.

fritter away, squander, throw away

I hate it when you squander our savings!

hoard, save, set aside, stash away

They set aside $200 each week for savings.

give back, pay back, refund, repay

I'll pay you back the money by the end of next week.

She owes Thomas a lot of money.

That painting is worth a lot of money.

I'd like to change twenty dollars please. Could you give me four five dollar bills?

The committee decided to allocate $50,000 for the project.

The program directs more than $5 billion to help the homeless.

He was charged with embezzling money from the company.

They used the internet to launder the stolen money.

The following list includes verbs that commonly follow the noun 'money'. Verbs that are similar in meaning are grouped together. Each verb or verb group has an example sentence to illustrate usage.

Money for the exhibit comes from donations to the museum.

The money goes to research.

The money just kept pouring in! It was amazing!

The following list includes nouns that commonly follow the noun 'money'. Nouns that are similar in meaning are grouped together. Each noun or noun group has an example sentence to illustrate usage.

I think you should hire a money manager for your savings.

The money supply is very tight at the moment.

You can pay by money order.

The following list includes phrases made with the noun 'money'. Each phrase has an example sentence to illustrate usage.

bet money on something

get money off something

Ask if you can get some money off the display model.

get your money's worth

Make sure to spend the whole day at the park to get your money's worth.

Your prediction was on the money!

the smart money is on

The smart money is on Tom for the director's position.

throw money at something

Don't just throw money at the project. Make sure you demand results.

throw your money around

Peter throws his money around like it meant nothing.