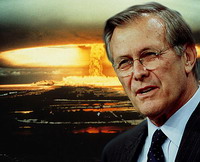 First you see a blinding flash of light, brighter than the Sun. Moments later, a huge ball of fire appears, brilliant orange. The fireball begins to rise into the sky. Soon it widens at the top and is shaped like a mushroom. A thundering sound and blast of heat reach you 15 miles (24 kilometers) away. You are seeing the explosion of the world’s first nuclear weapon, on July 16, 1945, in a New Mexico desert.

WHY DO WE HAVE NUCLEAR WEAPONS?

Nuclear weapons are the most destructive weapons ever made. Building a nuclear weapon was a top-secret project during World War II.

Scientists had been working on this weapon—the atomic bomb—for three years by 1945. Almost nobody else, except the president of the United States, knew about this work. The secret effort to build a nuclear weapon was called the Manhattan Project.

Germany had already surrendered by the time the atomic bomb was ready. But Japan was still fighting the war. To end the war quickly, the United States dropped two atomic bombs on Japan. The bombs killed at least 100,000 people and destroyed the cities of Hiroshima and Nagasaki. Japan surrendered soon afterward. The nuclear age had begun.

WHY WAS THERE A NUCLEAR ARMS RACE?

The nuclear arms race was a buildup of nuclear weapons after World War II. When the war ended, scientists knew that it was possible to build nuclear bombs far more powerful and destructive than the first atomic bomb. Some people, including scientists, thought it was wrong to build these weapons of mass destruction. Others feared that the Soviet Union would make them first.

By the late 1940s, the Cold War pitted the United States and its allies against the Soviet Union and its allies. Each side feared an attack from the other side, though their armies did not actually fight during the Cold War. Everyone knew that a war using nuclear weapons would be a terrible disaster. A nuclear war would kill millions of people and possibly end life on Earth.

HOW DO NUCLEAR WEAPONS WORK?

A nuclear weapon gets its name and its explosive power from the nucleus (core) of an atom. Atoms are tiny building blocks of matter much too small to see. An atomic bomb works by fissioning (splitting) the nuclei of atoms of the metals uranium or plutonium. It is sometimes called a fission weapon. A hydrogen bomb works by fusing (joining together) the nuclei of atoms of the gas hydrogen.

A nuclear weapon destroys by the power and heat of its blast. The atomic bomb dropped on Japan flattened buildings within 3 miles (5 kilometers) of the blast. Heat from the bomb caused fires and burned everything near the place it exploded. People’s skin was burned as far as 11 miles (18 kilometers) from the blast site.

A nuclear weapon also releases harmful radiation. People near the blast can die of radiation sickness even if the bomb doesn’t kill them. People farther from the blast may develop cancer and other illnesses from radiation months and years after the bomb explodes.

THE FUTURE OF NUCLEAR WEAPONS

No one has used a nuclear weapon in war since the United States dropped atomic bombs on Japan in 1945. For some years, countries tested their bombs underground or in remote places. However, test-ban treaties have halted the testing of nuclear weapons.