Sahara, great desert area, northern Africa, the western portion of the broad belt of arid land that extends from the Atlantic Ocean eastward past the Red Sea to Iraq.

The boundaries of the Sahara are the Atlantic Ocean on the west, the Atlas Mountains and the Mediterranean Sea on the north, the Red Sea and Egypt on the east, and the Sudan and the valley of the Niger River on the south. The boundaries, however, are not clearly defined and have been shifting for millennia. The Sahara was once a fertile area; millet was cultivated there over 8,000 years ago. As conditions gradually became drier, however, and desertification set in, farmers abandoned their land.

Geographically distinct are the western Sahara, which is sometimes called the Sahara proper; the central Ahaggar Mountains and the Tibesti massif, a plateau region; and the Libyan Desert in the east. The western Sahara is an area of rock-strewn plains and sand deserts of varying elevation. The land is almost entirely without rainfall or surface water but possesses a number of underground rivers that flow from the Atlas and other mountains. Occasionally the waters of these rivers find their way to the surface; in these naturally irrigated oases, plants grow freely. The soil of this region of the Sahara is fertile and, where irrigation is possible, produces excellent crops. The central plateau region of the Sahara runs for approximately 1,610 km (approximately 1,000 mi) in a northwestern to southeastern direction. The plateau itself varies in height from about 580 to 760 m (about 1,900 to 2,500 ft), and peaks in the several mountain ranges that rise from the plateau are from about 1,830 to more than 3,414 m (about 6,000 to more than 11,200 ft) high. Notable peaks include Emi Koussi (3,415 m/ 11,204 ft), in the Tibesti massif, and Tahat (3,003 m/ 9,852 ft), in the Ahaggar range. Although rainfall is scanty in the area, a number of the central Saharan peaks are snowcapped during part of the year.

The Libyan Desert is considered the most arid part of the Sahara. Moisture is almost totally absent and few oases exist. The land is characterized by sandy wastes and large dunes of sand 122 m (400 ft) or more in height. The valley of the Nile River and the mountainous area of the Nubian Desert to the east of the Nile are, geographically, part of the Sahara, but the irrigation afforded by the Nile transforms the desert into fertile agricultural land throughout much of Egypt. 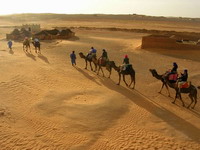 The Sahara as a whole is a tableland with an average elevation from about 400 to 500 m (about 1,300 to 1,600 ft). Only comparatively small areas are elevated as little as 150 m (500 ft) above sea level. In Egypt and Algeria, limited areas, such as the Qattara Depression, are below sea level. The climate is uniformly dry; most areas average less than 130 mm (less than 5 in) of rain per year, and some get none at all for years at a time. The temperature range is extreme, ranging between freezing to more than 54.4° C (130° F) in the western and central portions. Except in the oases the desert is almost devoid of vegetation, although some stunted, thorny shrubs grow in the western Sahara. Artificial oases have been created by drilling water wells more than 1,000 m (more than 3,280 ft) deep. The chief trees of the oases are the date palm and a form of acacia. Gazelle and antelope are found in many parts of the desert, as are jackal, fox, badger, and hyena. The Libyan Desert is virtually devoid of any form of animal or vegetable life. The northern Sahara has assumed economic importance with the discovery of extensive petroleum deposits in Algeria and Libya.