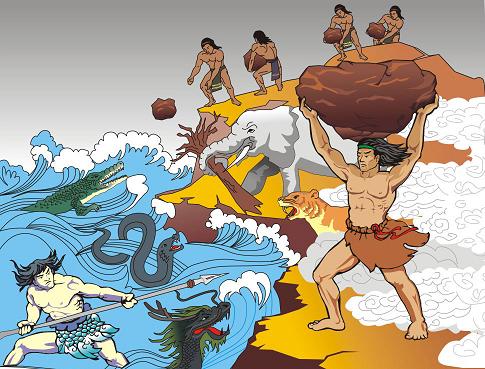 Vietnamese myths do not just recount what may be called the universal condition. They also have myths to explain their own situation in a tropical and monsoon land, and one such myth is the story of Son Tinh and Thuy Tinh.

Son Tinh was the spirit of the Mountain and Thuy Tinh the spirit of the Waters. The king, Hunh Vuong VI, had an extremely beautiful daughter, and he did not wish her to marry just any prince. He consulted with his court and hit upon the idea of sending out a proclamation far and wide to the effect that he was seeking a suitable party for his daughter. Princes came from far and wide but none was considered to be a good match for the king's beloved daughter.

Finally, one day there came at the same time two very handsome young noblemen asking for the princess' hand. Upon inquiry and examination, they turned out both to be equally distinguished, talented, and powerful. The king was in a quandary as to how to choose. Finally, he decided to send them both away, saying that whoever turned up the next day first with the proper wedding gifts would be given the princess in marriage.

He was, therefore, given the hand of the princess. Barely had the proceedings been completed when Thuy Tinh, the Water spirit, turned up with his gifts.

Being of a fiery disposition, Thuy Tinh could not accept his defeat. He sought to challenge Son Tinh to a contest to see who was the stronger and therefore more deserving of the princess. But Son Tinh simply ignored him, strong in his conviction that right was on his side. Furious, Thuy Tinh called on the waters of the rivers and brooks to overflow their banks and flood the land, In no time the whole land became a storm and raging sea that rose day by day and hour by hour, ruining all the crops and ravaging the land.

But Son Tinh was imperturbable in his palace in the mountains; all he needed to do was to get his mountains to rise a little bit higher when the waters threatened to flood them. After several days and weeks of trying to overcome his rival by raising the waters, Thuy Tinh finally had to concede defeat and order the waters to withdraw. This happened at the end of the monsoon but Thuy Tinh was never fully reconciled to the loss of the beautiful princess. Every year he tries to reenact the battle and that was how monsoons came to Vietnam.