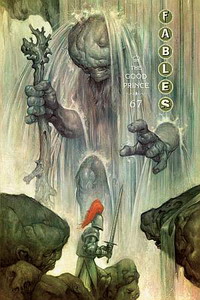 Fables are fabulous. They’re also good for you. A fable is a short story that teaches a lesson. It ends with a warning, or moral. “Don’t count your chickens before they hatch” is the moral of one fable. It means that you shouldn’t suppose things will happen the way you want them to.

All kinds of observations about life can be made in a fable. But events in fables usually involve animals. The animals keep the story interesting.

Aesop is one of the earliest and most famous tellers of fables. We don’t know much about him. He lived in ancient Greece in the 6th century bc. He was smart and kept busy writing hundreds of fables.

Many of Aesop’s fables are well known. “The Wolf in Sheep’s Clothing” tells how a clever wolf gets his meals. The wolf puts on the skin of a sheep. He no longer scares the sheep, now that he looks like one of them. One sheep follows him. Then he eats the sheep! The moral is “Appearances are deceptive.” It means that we should look beneath the surface to find the truth.

Aesop’s best-known fable is probably “The Hare and the Tortoise.” Our hero, a slow and steady turtle, enters a race with an overconfident rabbit. The rabbit’s overconfidence causes him to lose, and the turtle wins. The moral is “Slow and steady wins the race.” It means that steady effort brings success.

Aesop’s stories spread by word of mouth for a long time. Greek and Roman writers eventually wrote them down. His fables have never gone out of style.

Reynard the Fox was the central character of many French fables from hundreds of years ago. Reynard was a sneaky fox who tricked other animals. He used cleverness rather than force to get the animals to do what he wanted.

Danish writer Hans Christian Andersen is known for his fairy tales. Many of these fairy tales are actually fables in disguise. Read “The Ugly Duckling” or “The Emperor’s New Clothes.” See if you can you spot the moral.